June’s edition of Happiful Magazine, the only magazine devoted to the conversation around mental health, hits shelves on Thursday of Mental Health Awareness Week (13-19 May), featuring popular presenter and baker Nadiya Hussain talking about her ‘monster’ - panic disorder and anxiety - and influential ‘mumfluencer’ Louise Pentland, sharing her experience of healing after abuse and trauma.

Nadiya lives with panic disorder and told Happiful that she knows from experience that it’s hard to talk about mental health, and opening up for a BBC programme, to be aired later this week, was, “by far one of the hardest things (she’s) ever had to do.”

Nadiya saw a therapist and agreed for her sessions to be filmed as part of the hour-long special, Nadiya: Anxiety and Me, which will air Wednesday 15 May on BBC One at 9pm.

Nadiya says that dealing with her mental health is still a journey, but when asked about her advice for anyone going through something similar, she said: “I’d just tell them that they are not alone. We are all at different stages of anxiety in our own journeys, and although it’s one of the most isolating illnesses to have, if you’re reminded you are not alone, it does feel better.” 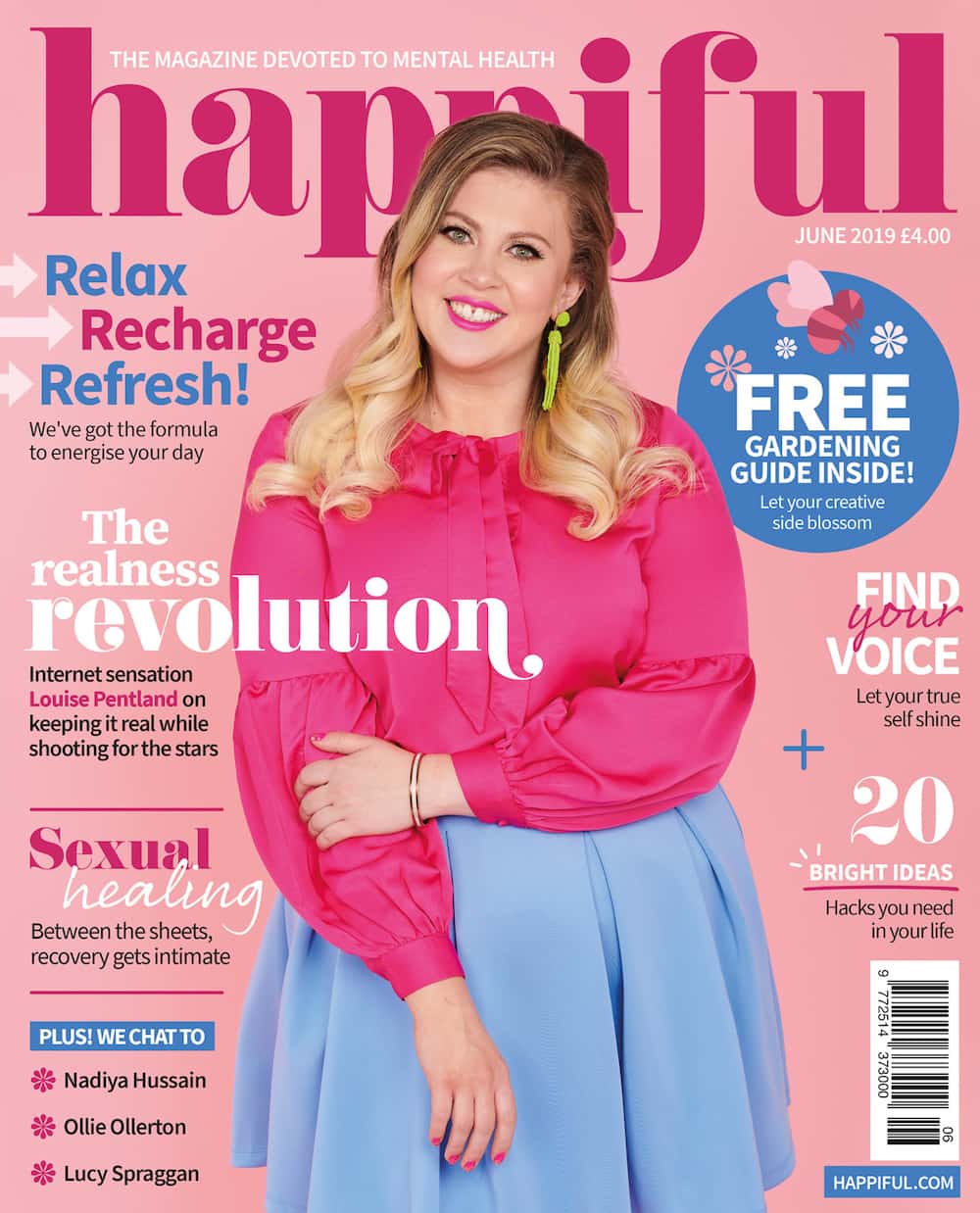 The importance of learning to live with your mental health is echoed further by the issue’s cover star, Louise Pentland, who has amassed over two million followers on Instagram and YouTube with her filter-free posts. One of the vlogging ‘originals’, Louise has been hailed as the UK’s most influential mother.

“I think we’d all be happier if we said: ‘We’re just doing our best.’” Louise told Happiful. “I don’t know a single person who’s like: ‘I’ve got my life fully together, thank you very much.’”

But Louise’s optimism and down-to-earth attitude didn’t come with an easy start. “You know those awful books you read where people say all the horrible things that have happened to them? That was my life for eight years, until I was 15,” explains Louise, who was so frightened of her perpetrator, she kept her ordeal a secret.

At the age of 15, Louise reached breaking point and found the courage to tell her dad what was happening. “I spoke up and ... he said that it was going to end. Then that was that, it was done. We call those ‘the dark years’.”

Louise, who holds a post-graduate diploma in counselling, dreamed of being a psychotherapist. She has subsequently become an advocate of therapy and turns to counselling during “difficult” life moments, including her divorce.

Louise is aware of how difficult this can be, and offers advice to Happiful readers, “Even in your darkest days, don’t give up because you never know what might happen,” she says. “You never know what’s going to happen to you. It makes me cry to think how lucky I am.”

Happiful is dedicated to mental health year-round. The magazine’s June issue will be on sale on Thursday 16 May. The magazine is also free in e-edition form by subscription at https://happiful.com.

The issue also includes a feature on gender dysphoria, and an interview with X-Factor star Lucy Spraggan.

For more information about Happiful Magazine or copies of the issue, please contact:

Over the past two years, many people have shared their experiences of their mental health and illness with Happiful readers. Public figures including Megan Crabbe, Munroe Bergdorf, Dame Kelly Holmes, Bryony Gordon, Callie Thorpe, Juno Dawson and mental health campaigners Jonny Benjamin and Neil Laybourn have appeared on its front covers.

The magazine is dedicated to helping people find the help and community they need - as is Counselling Directory, the first in the Happiful family of directories and resources.

Counselling Directory was established in 2005 by sisters Aimi and Emma, who were experiencing mental health challenges themselves. Aimi and Emma wanted to create a resource so others who needed support, like them, could directly access therapy and information about counselling, and take control of their own mental health support.

Happiful Magazine was subsequently launched in 2017 and is committed to continuing and de-stigmatising the mental health conversation, and sharing support and personal stories. The magazine is free in e-edition form, as the team believe there should be no cost to accessing the community and support it provides, as well as its inspirational content.

Earlier this year, Happiful launched its podcast I am. I have with guests including Estee Lalonde, Emily Dean, Psychotherapist Lee Valls, Martin Robinson and Lara Pradelska. Five special live-recorded episodes are being released across Mental Health Awareness Week.